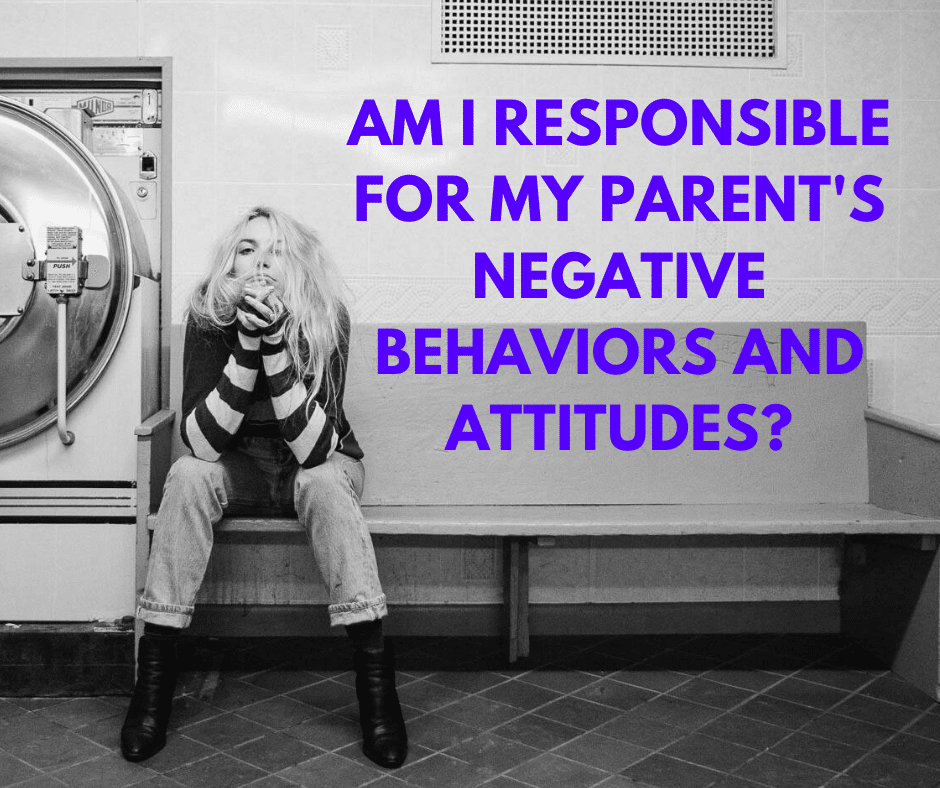 Growing up with a toxic parent can really muddy the waters when it comes to assessing our personal responsibility.

Both as children and as adults, we’re likely to struggle with this question in particular:

To what extent am I to blame for my parent’s negative behaviors and attitudes?

So often, we see our childhood selves as holding all the responsibility. We tell ourselves that we were to blame for our parent’s negative behaviors and attitudes.

At the same time, we tend to see our childhood selves as having held considerable power and control. Many of us tell ourselves, for example, “I could have stopped my parent’s negative behaviors and attitudes.”

When it comes to our adult selves, we often see things exactly the opposite.

We’re likely to struggle with taking responsibility for all the “stuff” we still carry with us today—stuff that, as adults, we now have control over and are equipped to handle.

In order to move toward a more realistic assessment of our personal responsibility we need to be able to separate the stuff we “own” from the stuff we don’t—and never did.

But this can be a really difficult task when you’ve grown up with a toxic parent.

Why is separating our responsibility from our parent’s so difficult?

For one thing, growing up in a toxic environment can make it extremely difficult even to discuss the emotional hurt you’ve experienced over the years.

Many of us learn to defend against these feelings of guilt and shame by justifying or explaining away or our parent’s hurtful behaviors.

“Can I really blame my dad when he himself grew up with abusive parents?”

Or, “My mom couldn’t help being so unaffectionate; her own mom was always so cold and critical.”

And we can also begin to exercise the power we already hold to address and resolve the stuff that weighs us down and holds us back.

But how do you separate your “stuff” from your parent’s?

“The boxes” is an exercise I’ve found to be helpful for separating our experiences and emotions from our parent’s.

But before I share how this exercise works, let me tell you about Tim.

Throughout most of Tim’s childhood, his father worked as a traveling salesman and was seldom home for more than a day or two at a time. Tim’s mom, who was Tim’s primary caretaker, suffered from extreme bouts of depression and would often spend hours crying in her bedroom with the door left open. Times when Tim would cry or express vulnerable emotions as a young child, his mom seldom acknowledged him. When she did acknowledge Tim’s feelings, she often did so by threatening to hurt herself if Tim didn’t stop his “whining.”

Like many others who grew up in similar circumstances, Tim has a difficult time talking about his childhood experiences without experiencing intense guilt and shame. On the rare occasion Tim does talk about his experiences with his mom, he almost always emphasizes to others that his mom grew up in an abusive home and suffered from clinical depression.

Here’s how “the boxes” exercise works

First, Tim gets a blank sheet of paper and draws two boxes of equal size.

In the first box, he writes about the reality of his mom’s experience.

Then, in the second box, he writes about the reality of his own experience:

As it did with Tim, this exercise can help you begin to see that when it comes to your relationship with your parent, two realities exist—your parent’s (box 1) and your own (box 2). One doesn’t negate the other. The fact that Tim’s mom suffered her own painful experiences and emotions doesn’t mean that Tim’s box doesn’t exist. Tim experienced his own emotional pain and suffering. Both boxes exist on their own.

Once you can acknowledge your parent’s box, you can begin to see the sense in which you don’t have the power to heal your parent’s pain—nor is it your responsibility to do so. Only they can address the stuff in their box, assuming they ever choose to do so.

Additionally, once you’ve separated things into their appropriate boxes, you can set your parent’s box aside and begin to give the stuff in your box the attention it deserves.

After all, it’s the stuff in your box that you (and no one else) holds the responsibility and power to deal with.

How Group Therapy Can Change Your Life

How to Find the Best Therapist for You