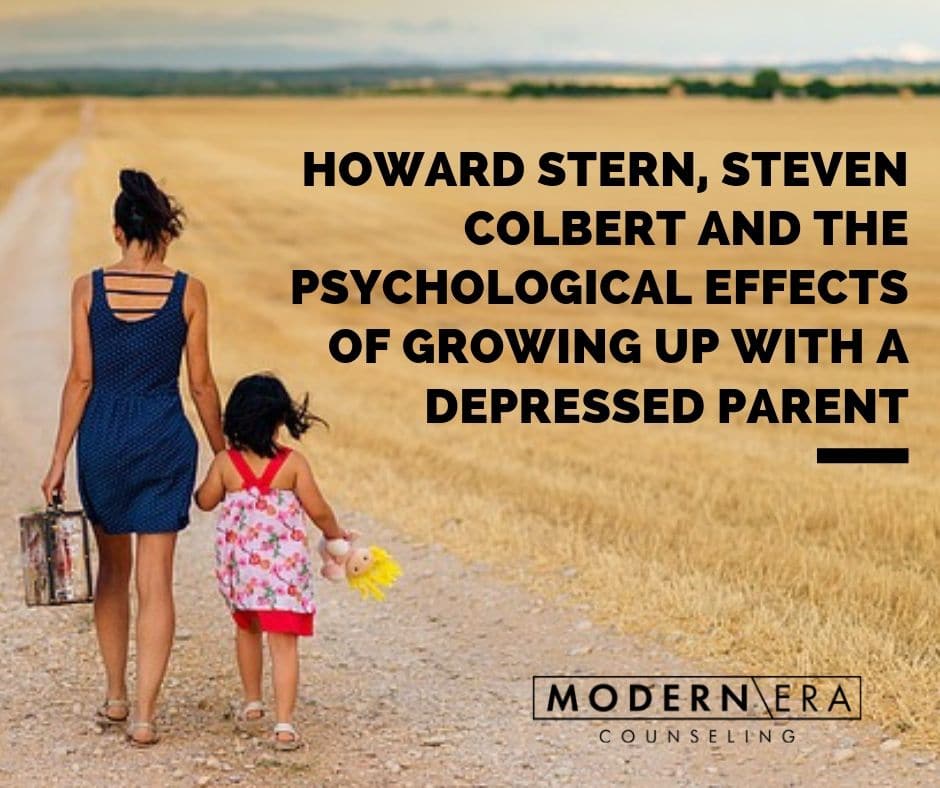 When you’re a child or teenager and one of your parents suffers from depression, you do what all kids in your situation do: you adapt.

You adjust to your parent’s depression to make life easier and more predictable. You learn what to say and what not to say, how to act and how not to act. You even shape your most basic self-beliefs to align with and reinforce the “you” you need to be.

Adapting in this way is important, even necessary.

But over time, adjustments that were once necessary tend to outlive their usefulness. As you transition away from home and into adulthood, learned ways of being that once made life easier can begin to make life a whole lot more challenging.

What Happens When You Grow Up with a Depressed Parent?

In a recent Fresh Air interview on NPR, Terry Gross spoke with Howard Stern about his experience of growing up with a mom who suffered from clinical depression. Stern’s story offers one example of how a parent’s depression can affect you well into adulthood.

Stern tells the story of regularly coming home from school to find his mother distraught and sobbing, and how it became his job as a child to cheer her up. He explains how he had to become proficient at making his mother laugh to make her feel better, and how this became the genesis of his career in comedy.

There’s certainly a touching quality to this story. But, as Stern acknowledges, having to take on the role of caring for your mother’s emotional needs can have a lasting impact.

Now, let’s look at some of the more common challenges you might face as an adult after years of growing up with a depressed parent.

But maybe, like many others who grow up with a depressed parent, you didn’t have a way to make your parent laugh. If so, you likely had to learn how to hide your emotions. Without a way to alleviate your parent’s sadness, burying your own emotions ensured never “adding to their pain.” It was a way to avoid making life at home any harder than it already was.

Problem is, this common way of coping with a parent’s depression is never limited to life “at home.” Concealing your emotions quickly becomes a pattern that carries over into your other relationships, as well. During your adolescent years, you struggle to establish meaningful friendships because you’re always holding yourself back from peers. And in adulthood, true intimacy eludes you because being open and vulnerable with others feels next to impossible.

Struggling to Communicate Your Wants and Needs

Another way children often adapt to growing up with a depressed parent involves learning to prioritize the parent’s wants and needs. As a child, putting mom or dad’s emotional needs ahead of your own is an effective way of “taking care” of your parent. When you were younger, ensuring your parent’s needs were met meant your mom or dad’s emotions were more predictable—and that life didn’t feel quite as chaotic.

But prioritizing your parent’s needs throughout your childhood years usually comes at a cost.

When your parent’s wants and needs always take precedence, you begin to internalize the belief that your own wants and needs don’t matter. Like other adults who grew up with a depressed parent, you may hold the belief that asking for what you want is “selfish.” And in those rare cases when you do communicate your wants or needs to others, intense feelings of guilt and shame set in, reinforcing the belief that advocating for yourself is wrong.

Feeling Stuck in the Role of Caretaker

In the same Fresh Air interview, Terry Gross plays a clip of Howard Stern interviewing Steven Colbert. Like Stern, Colbert grew up with depressed mom in the years following the death of Colbert’s father and two brothers in a tragic plane crash.

STERN: Is it difficult for you to be around a crying woman now because of your mother?

COLBERT: I think there’s no doubt that I do what I do because I wanted to make her happy.

STERN: You’re used to cheering up a woman.

STERN: I know of this.

The exchange highlights the sense of responsibility Colbert developed as an adolescent, namely to play the role of caretaker to his depressed mother—to meet her need to be cheered up.

Stern’s question also alludes to the lasting psychological effect of having to take care of one’s parent in this way. When you grow up with the responsibility of assuaging your parent’s sadness, that same responsibility can easily carry over into other relationships. Well into adulthood, you may find yourself automatically assuming the role of caretaker, especially with those who remind you of your depressed parent.

With struggling to communicate your wants and needs can come the related challenge of setting healthy limits in your relationships. And feeling the need to take care of others emotional needs as described above can certainly add to this challenge.

When you instinctively assume the role of caretaker and then, added to that, feelings of guilt and shame keep you from communicating your desire for more equitable relationships, limit-setting with others can present a serious challenge. And the more you struggle to establish healthy limits in your relationships, the more reinforced your limiting self-beliefs become. Whether it’s the belief that “my needs aren’t important” or “I’m not important,” it’s a vicious feedback loop that can leave you feeling powerless and insignificant.

How Does Counseling Help Those Who Grew Up with a Depressed Parent?

The psychological effects of growing up with a mother or father who suffers from depression are interpersonal in nature. For this reason, working with an interpersonal therapist can be a real game changer.

In interpersonal therapy, your therapist uses the client-therapist relationship to identify and correct disruptive patterns like those described above. Your therapist will help you access your true emotions, develop skills for communicating what you want and need from others, break free from the one-sided role of caretaker and set healthier limits in your relationships.

Did you grow up with a depressed parent? We can help! Contact Modern Era Counseling today at (704) 800-4436 to learn more or book your first session online now.

Feeling Alone? Here are Five Ways to Cope if You’re Single and Lonely

Is That Funk You’re in Clinical or Existential Depression?