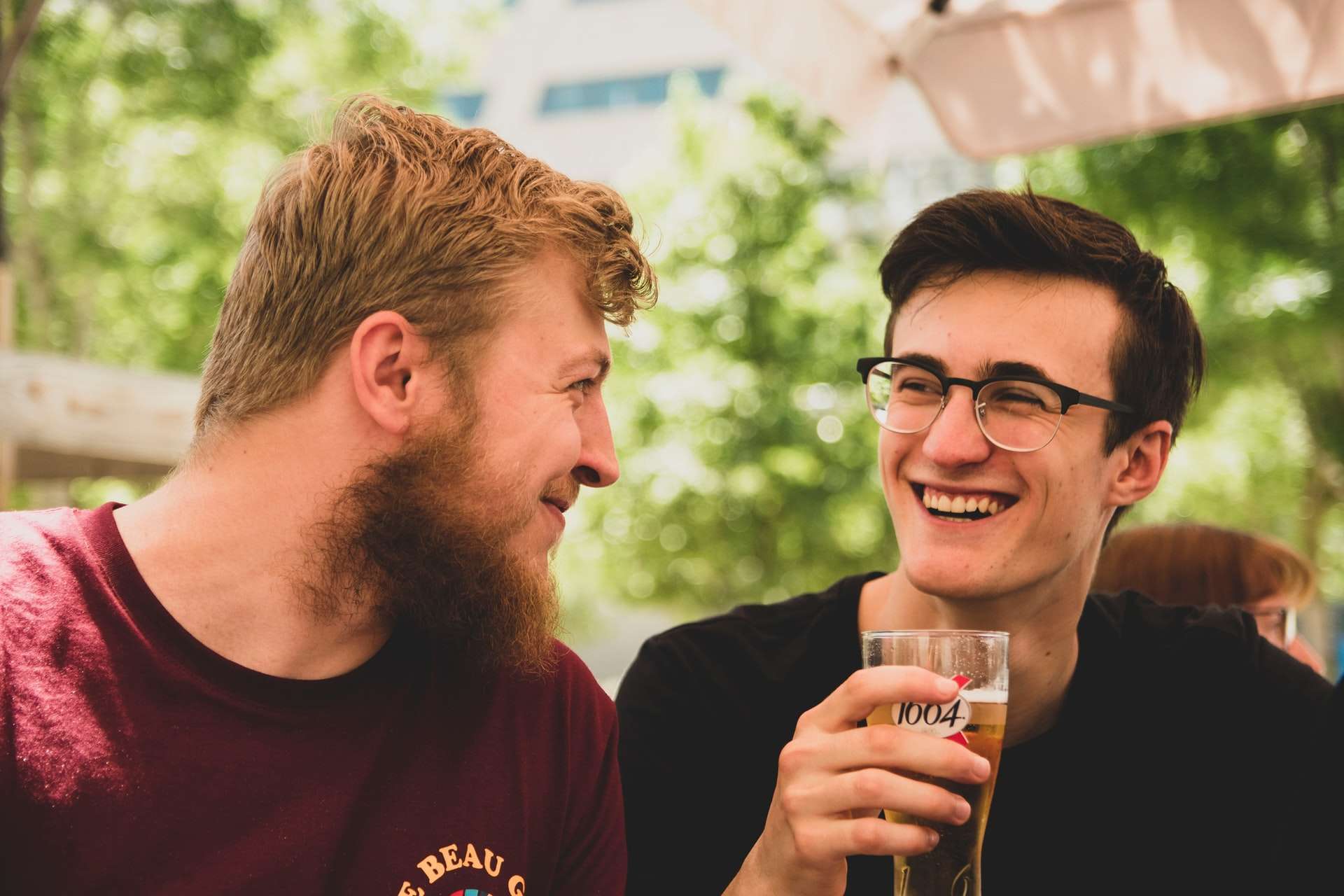 The world of modern dating is awkward and daunting enough, but it’s doubly hard when you’re a gay, bi or trans young adult. Personally, I’d rather be kicked in the face by a mule than enter the dating scene.

Trying to find another “likeminded” individual in a sea of people who just happens to be hiding in plain sight like you are can be maddening and terrifying.

It can also be electric and deeply fulfilling, which is why most of us eventually connect with someone and begin the dating process in earnest. It’s a significant step that brings with it important considerations, things like: What should you expect when you start dating? How do you decide what’s important to you—your absolutes and the things on which you’re willing to compromise? How should you want to be treated and how do you treat your love interest?

Knowing what a healthy relationship is and when a relationship is becoming toxic is crucial for dating in a safe and fulfilling way. So, let’s explore some of the essentials that experience has taught me are absolutely necessary for any relationship to have a chance of success.

As cliché as it sounds, the very bedrock of any relationship should be honesty. If you can’t genuinely express yourself to someone who’s important to you—as uncomfortable as it might be—the two of you have zero chance of anything long term. Couples have little to no chance of making informed, meaningful decisions when they’re being made on fabrications instead of what actually IS. (I’m reminded of a computer programming acronym: GIGO. Garbage In, Garbage Out.)

If you can’t offer or expect honesty, you’re forfeiting your happiness. Don’t lie and DON’T ACCEPT LIES. Speaking from experience, a dishonest person shall not a happy partner make. If someone lies to you and apologizes only to lie again, they’re not sorry about the lying. They’re sorry about getting CAUGHT.

Also, it may be uncomfortable but our families and friends should really know when we’re dating someone. Being LGBT, there is often some fear or dread in telling others of a relationship you’re in. It’s totally understandable. If you’re afraid to at first or you feel unsafe about disclosing that at the beginning of the relationship, that’s ok. It’s ok to get your footing in that regard.

However, if the relationship progresses, we should want the people around us to know. Hiding something like that becomes toxic—I know. I dated so many guys and hid it from my family out of fear. That decision was not great for my emotional health, and it drove a lot of great guys away. I felt terrible about myself, and it wasn’t fair to the folks around me. It’s a great feeling to share that relationship with friends and family. Some, I’m sure, won’t approve of it—but most will. Trust me. And you deserve a relationship that’s open to everyone just as much as folks in a straight relationship.

Again with the Vanity Fair checklist for happiness. It’s so true, though! As someone who has been cheated on more than an eighth-grade math quiz, it’s devastating to discover that someone you’ve been faithful to has stepped (sometimes leapt) outside the bounds of the relationship to pursue another. Obviously, it’s a clear indicator of something wrong.

There are countless reasons people cheat. Sometimes they’re not getting what they need intimately. Sometimes personalities grow apart or clash. Lots of times it’s because the relationship has become complacent and the low-hanging fruit of sexual fulfillment with someone outside of the relationship is irresistible. (OK, that was oddly specific.)

In some particularly hurtful situations, it’s the cheating ITSELF that’s the problem; there’s no particular reason some partners cheat other than the fact that they are innate cheaters. Those people don’t really care who they cheat on you with; they just get off on cheating. Girl, you can’t do nothing with that.

Ultimately, just make sure the person you’re invested in has also made an investment in you.

In my experience, promiscuity is VERY prevalent in the LGBT community. I don’t know what it is about gay guys but we are some of the most promiscuous creatures on God’s green earth. Our culture lauds it! We create entire communities—lookin’ at you, Fire Island, Grindr and Scruff—around this sexually free mindset. Over time, I’ve noticed that this makes it very hard—and very rare—to find gay relationships that endure. Just an informed observation. That doesn’t, however, mean that they don’t exist.

Some folks are ok with some fluidity in their relationships—and, hey, whatever works. I think LGBT relationships can be some of the most colorful and lovable connections people can make. Sexual safety is, of course, paramount. If you’re going to be physical with a new interest, use protection for God’s sake. It’s free at any Health Department. There are medications (PrEP) that significantly lower the transmission rates of HIV (Descovy, Truvada, etc.). If you do use PrEP meds, please engage your brain long enough to understand that they don’t protect against any other STDs. PrEP isn’t a get-out-of-jail-free card. It ain’t gonna keep you from getting other booty cooties, girl.

I will not be swayed from asserting that no matter who you are if you’ve been in ANY relationship, it began with a physical stirring as a response to someone else’s physical person. You can’t tell me any differently. We are all living organisms—highly advanced (debatable)—who have basic, animalistic drives. When I was interested in someone, I first wanted to jump their bones and THEN progressed to getting to know them as a person. Be it known that I am not condoning any bone-jumping: I’m only relating my personal experience – which, unfortunately, is vast and questionable. But we’re not talking about me, we’re talking about you, Mary.

When you’re young and pretty it is a GIVEN that things will get physical between two people who’re dating. It can be kissing or more—it’s all physical and YOU get to decide your comfort level. Know what your boundaries are and do NOT compromise your limits. A sign of a healthy relationship is when both individuals respect the other so much that they’d do nothing to make them feel unsafe or undervalued. I’ve found that it makes those times between two people sweeter because it deepens the connection through vulnerability.

Then, there’s the emotional connection. It ain’t always about the body. I’ve always thought that the emotional connection I’ve had with partners was FAR more rewarding than a solely physical relationship. The feeling of safety and contentment when you snuggle up in bed to someone you love and drift off to sleep—man, that’s a personal favorite. Just talking and enjoying the mind and the spirit of the other person is deeply satisfying. I’ve had that with a few partners over the course of my hundreds of gay-years and I’ll always cherish those experiences.

I mention this because I think that the LGBT community is so HIGHLY sexualized; we see it everywhere! Every dating app is a thirst trap. We can’t wear regular underwear – it has to be Andrew Christian or some shit. Gay people watch a LOT of porn, too. (I mean, I would never but, you know.) I mean, no judgment, mama, but these are all painful truths and if you’re a young gay guy you KNOW them to be true! Again, it’s funny because it’s true. So, it’s no surprise that a lot of LGBT youth relationships lean heavily towards physicality. I’m suggesting that it’s healthy to balance that drive with falling for someone’s mind. It can be amazing.

It goes without saying that no one should have to endure physical or emotional abuse from anyone—ESPECIALLY from a romantic partner. Sadly, I can speak to this, as well. When I was in the military, I started dating a guy who routinely beat the hell out of me and tortured me emotionally by keeping me absolutely terrified all the time. I’d never been in a same-sex relationship before and I was honestly so amazed that I’d found someone who wanted me that I was willing to compromise my safety for the sake of the relationship. That speaks to my self-esteem and self-worth at the time, which were obviously in the shitter. Know your worth. LGBT relationships should be as fulfilling, deeply meaningful and as safe as any straight relationship.

I think sometimes when LGBTs are treated as second class citizens we begin to think we should have second class relationships, like it’s already marred from the start because it’s same-sex. If your sexuality is creating some self-esteem questions, please reach out to a professional who can guide you to a healthier understanding of yourself. It underpins your entire personhood.

The awful truth is that I became one of those people who wouldn’t see the danger I was sleeping with and rather than move to safety and be on my own, I chose to stay with familiar pain. I stayed for far too long, but I did eventually break off the relationship and recovered my sense of self.

If you are in an abusive relationship, please let someone know. A friend; a family member; a policeman; hell, even an absolute stranger. Just reach out. It’s the first step to freedom. I think sometimes LGBTs also don’t want to ask for help if they aren’t comfortable with revealing their same-sex relationship. Your safety is more important than your discomfort. If it’s gotten to that point, seek help.

I was lucky. I told my best friend about the abuse and he readily pulled out a Crocodile Dundee knife and threatened to cut that asshole’s balls off. Sorry…the emotional damage is real. (Also…isn’t that an absolute SERVE that I had a big, beautiful Army man defend me with a sharp object? GI Joe realness, honey. I live.)

Gay dating doesn’t have to be any different than other dating demographics—well, apart from the obvious. However, it is harder to navigate a gay relationship than straight relationships in my opinion. There’s this weird hesitancy to disclose our relationships sometimes to certain people and I think it detracts from the joy of dating because it almost seems to assume that from the outset there’s something shameful in it. It’s not ideal for fostering healthy connections. I think for us LGBTs, it’s important to establish our normalcy. Work towards relationships that fulfill you and expand your understanding of what it means to offer yourself in a vulnerable way to another person. When it’s right it is so rewarding.

Gay love is awesome. It can be tricky, though. Understand that there are people around you who love and support you. Should you need help working through an LGBT relationship as a young person, professionals are available to help guide you. Many of us have family and friends who are available to walk with you. Also, don’t be afraid to find a gay mentor—a wise elder, as it were. Someone who has been through it and who can help you avoid pitfalls and who can bolster you. I WISH I’d had that resource as a twenty-something gay. Rest assured, though. You’ll always have this bitter, old queen in your corner.

Jeff Couick is a frequent contributor to our blog here at Modern Era Counseling. Jeff draws on his personal experience as a Buddhist-Christian, a gay person, a military vet, and a trauma survivor in tackling topics ranging from LGBT relationships, emotional wellness, and getting the most out of therapy.

Toxic secrecy stifled my growth as a gay male for years. Here’s how I learned to live my truth.

Why does my wife want to separate? Can I change her mind?