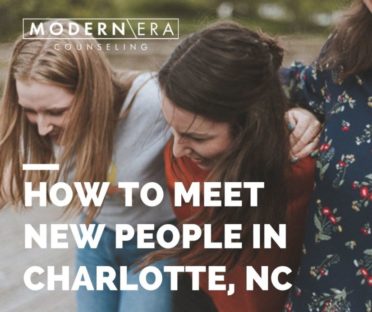 It’s not always easy meeting new people in Charlotte, and this can definitely make for a lonely experience when you’re new to the Queen City.

Attempting to make new friends as an adult in Charlotte can sometimes feel like an act of futility.

For one thing, Charlotte’s a transient town. People are always coming and going.

There’s also the fact that a lot of people move here with families and well-established social networks.

So where does that leave the young professional looking to make new friends in Charlotte?

Sure, there’s work. But chances are you’re looking for relationships with people you share more in common with than just an employer.

There’s also the dating scene, and we all know it’s never been easier to connect with singles than it is right now. But maybe you’re already in a relationship. Maybe that’s not what you’re looking for. Or, maybe you are interested in dating, but you’d like to meet some other people, too.

Where do you meet friends in Charlotte?

As a therapist in Charlotte who sees a good number of single professionals, many of whom are Charlotte transplants, this is a question I get relatively often.

Of course, it’s not a question with an easy answer. In part, because…well, it’s Charlotte. But aside from the whole banking, transient city thing, there’s the simple fact that, even if I did have a go-to answer for this question, it wouldn’t possibly be the answer everyone’s looking for.

Still, I wanted to be able to point people in some sort of direction.

So, I decided to compile the following list of places to meet new people in Charlotte, NC.

I left off the kind of places that everyone tells you—bars, grocery stores, dating apps, etc.

It’s also worth mentioning that many of the ideas that found their way onto this list were shared with me by past clients of mine, folks who managed to navigate this seemingly lonely city and build meaningful relationships with fellow Charlotteans.

CLUBWAKA is best known for its adult kickball leagues, but the organization runs many other adult sports leagues, as well. Haven’t played kickball in a while? Well, CLUBWAKA is for people of all abilities and its mission statement makes clear that the group is more of a social club than a hyper-competitive sports league. If you’re new to Charlotte, CLUBWAKA may be a great way to make new friends.

Just because you’re done with school doesn’t mean you can’t still leverage your ties to your alma matter. Charlotte has many active alumni associations that offer up all kinds of opportunities to get out there and make new friends.

Charlotte has no shortage of running clubs for runners of all abilities. Charlotte Running Club has a long list of running groups based on pace, so you won’t have to worry about being too winded to carry on a conversation with your fellow runners. Like to end your runs with a pint? You might want to check out Sycamore Run Club, Heist Brewery Run Club, NoDa Brewing Run Club or Triple C Beer Runners.

Are you the theatrical type? You might want to check out Matthews Playhouse of the Performing Arts. The Playhouse is a community-based theater in Matthews, NC. Getting involved in an upcoming production is a great way to connect with other amateur performers in the Charlotte area. Information about upcoming productions and auditions can be found here.

Volunteering in the local community offers countless ways to meet new people, and Hands on Charlotte makes getting involved super easy. The program, which is sponsored by United Way of Central Carolinas, helps connect you to volunteer opportunities in the Charlotte area. Getting started is as easy as signing up online and attending a volunteer orientation. After your orientation, you’re ready to go. It’s just a matter of finding a current project that interests you and fits your schedule.

Ever listened to the Moth Radio Hour on NPR? That’s basically what Charlotte Storytellers does. Participants develop, hone and perform personal life stories to foster empathy in the local community. The group is open to amateur and experienced storytellers. Weekly meetings are held every Monday at 7:30 pm “to play silly improv games and workshop stories on a theme.” Additionally, the group hosts story showcases, storytelling open mics and interactive workshops once per month.

Support groups like Alcoholics Anonymous and Narcotics Anonymous may not make sense for everyone. But if you happen to find yourself struggling with alcohol or other drugs (not uncommon when you feel alone in a new city) or if you’ve dealt with substance abuse in the past, AA meetings and NA meetings can be great places to find support and meet new people.

Improv isn’t for everyone. But if you’re up for giving it a try, Charlotte Comedy Theater is a great place to check out. The group offers improv classes every Thursday from 6:30-9pm in 6-week sessions at the NC Music Factory. The 6-week class will run you $250, but you’ll get professional improv training and likely meet some great new people in the process.

If you’re spiritually inclined, faith communities can be another great place to meet people. Plus, there’s a good chance that you’ll have a lot in common with the people you meet, at least in terms of values and beliefs. There’s no shortage of local churches in the Charlotte area, but there are plenty other types of faith communities, too, such as the Charlotte Community of Mindfulness.

It’s not uncommon to experience feelings on loneliness in a new city—or even if you’ve been in Charlotte your whole life—but you shouldn’t have to feel so alone. Contact Modern Era Counseling today to get the support you deserve!

How much screen time is too much?

Social media anxiety: What it is, common signs, & how to cope