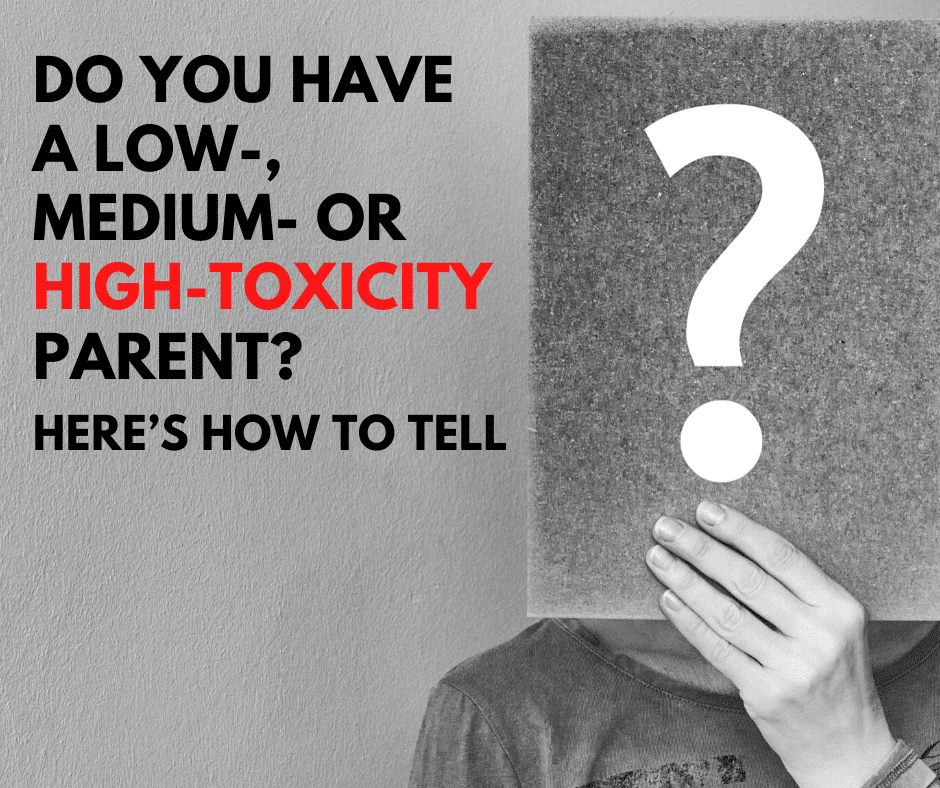 The term “toxic parent” is one we’re hearing used more and more these days.

But what is a toxic parent?

Are they all the same?

And how can you tell if you’ve got one (or, gulp…two)?

In this post, I’m going to be sharing with you three different types of toxic parents I’ve come to recognize in my work as a therapist: low-, medium- and high-toxicity.

Certainly, there are plenty of nuances within each of these three categories. And, yes, those nuances (even the subtle ones) are important to understand, too.

However, over the years, I’ve found that simply identifying your parent’s toxicity level tends to be the easiest and most helpful starting point for most of us.

(By the way, if you haven’t already, you can take my Toxic Parent Quiz. It’s a simple tool I created to help you determine your parent’s toxicity level.)

Let’s take a look at these 3 different toxicity levels.

Parents with low toxicity scores can generally be described as emotionally mature.

These parents regularly communicate feelings of love and acceptance, and their kids feel safe and secure in their presence. Parents with low toxicity scores also excel when it comes to validating their children’s emotions, helping them feel seen and important.

Low-toxicity parents respect the independence of their teenage sons and daughters, showing interest in their teens’ developing thoughts and opinions even when they differ from his or her own. And when disagreements or arguments do take place, these parents are far more likely to model healthy, productive ways of dealing with conflict.

A parent with a low toxicity score is also more likely to see and treat their adult child as an equal. Additionally, these parents generally avoid offering unsolicited advice or trying to take responsibility for their adult sons and daughters. Consequently, when you grow up with a low-toxicity parent, you likely look forward to spending time with your parent and find it easy to communicate openly with him or her.

Even when low-toxicity parents and their children don’t see eye-to-eye, conversations tend to be productive and usually result in both parties feeling better, not worse.

These parents tend to avoid voicing feelings of love and acceptance toward their children or only do so inconsistently. While their children tend to feel safe and secure when spending time with them, on rare occasions their actions may result in their children feeling frightened or uncomfortable.

Parents with medium toxicity scores are often inconsistent when it comes to meeting their children’s emotional needs. Sometimes they prioritized their child’s needs; other times, their needs take precedence. These parents are also prone to invalidating their children’s feelings with statements like “You’re just too sensitive” or “Stop your whining.”

Medium-toxicity parents usually acknowledge the importance of their teenage sons and daughters developing a sense of independence. However, due to varying levels of self-involvement, these parents can struggle at times to support a teenage child in the process of becoming his or her own person.

When it comes to conflict, these parents rarely, if ever, resort to violence. They are much more likely to shut down arguments by way of raising their voices or simply leaving the room. Simply put, arguments end when they decide and on their terms.

When adults with medium-toxicity parents push back or attempt to set boundaries, these parents are likely to feel hurt and respond in an emotionally immature manner, such as not calling their son or daughter for days or even weeks. Consequently, people with this type of parent, tend to avoid communicating openly with them, choosing instead to share little about what’s happening in their lives.

Though adult children of medium-toxicity parents often prefer to limit the amount of time they spend with one or both of their parents, many struggle with feelings of guilt when cutting visits short or otherwise trying to keep their distance.

Parents with high toxicity scores can be described as emotionally immature.

These parents seldom communicate feelings of love and acceptance toward their children or do so inconsistently. Their words and actions often lead their children to feel anxious, uncomfortable or even unsafe when spending time with them.

Highly toxic parents are very often threatened by the developing independence of their teenage sons and daughters, which explains their tendency to belittle their teens’ personal thoughts and opinions. Furthermore, parents with high toxicity scores seldom do well with conflict, often resorting to behaviors like shouting, issuing threats, playing the role of victim, or even becoming violent when conflict occurs.

High-toxicity parents also struggle or simply refuse to see or treat their adult sons and daughters as equals. They are prone to giving unsolicited advice and to criticizing an adult child’s way of doing things, especially when their adult child does things differently than them. Attempts made by adult children to set boundaries with highly toxic parents often result in these parents accusing their children of being mean, disrespectful or even hateful.

Almost as a rule, children of highly toxic parents avoid communicating openly with their parent, opting instead to tell him or her little if anything about what’s happening in their lives. Furthermore, while children of these parents commonly dread having to spend extended periods of time with their toxic parent, many still do so to avoid the strong feelings of guilt and shame that come when choosing to keep their distance.

Interested in learning more about toxic parents? Check out my YouTube video 10 Easy-to-miss Signs of a Toxic Parent now.

Need some help dealing with a toxic parent? You’re in the right place. At Modern Era, we’re here to help you gain the tools, strategies, and know-how you need to break the toxicity cycle for good. Contact us today to get the help you deserve.

Understanding Gaslighting: What is it and How Does it Work?

5 Ways Your Parents Affect Your Relationships

10 Easy-to-miss Signs You Have a Toxic Parent