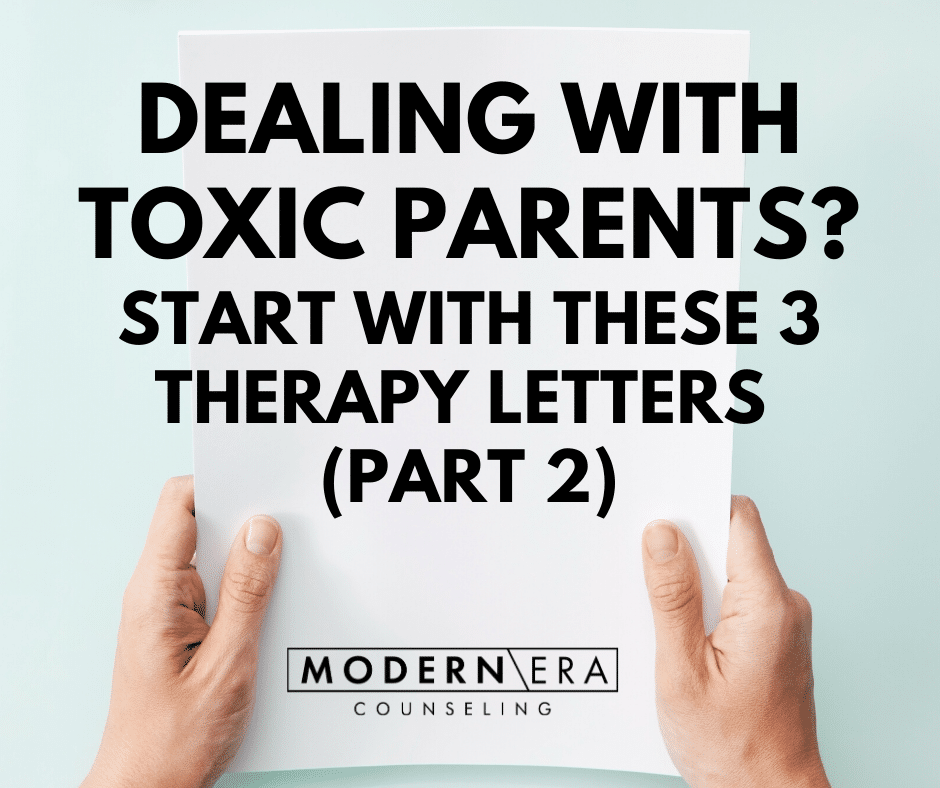 This blog post is part 2 in a two-part post on writing therapy letters for dealing with toxic parents. If you haven’t had a chance to read part 1, where I explain the rationale behind writing these letters and share tips for making the exercise its most effective, you can check out that post here.

Letter #1: The never-to-be-mailed letter to your toxic parent

This first letter can be written as a stand-alone letter. Alternatively, it can be the first in a series of letters, in which case you would also write the other two therapy letters described below.

The prompt for this first letter is a straightforward one: write a letter to one of your parents expressing how he or she made you feel when you were younger. Try your best not to plan out your letter before writing it. Instead, just notice where your thoughts and feelings lead you as you begin to write and let yourself put all that comes up—feelings, memories, sensations, etc.—into words.

Let’s start by looking at an example of this type of therapy letter:

(Note that all three of the example letters below come from Sheldon Kopp’s 1972 book, If You Meet Buddha on the Road, Kill Him: The Pilgrimage of the Psychotherapy Patient.)

I started to write “mother” out of habit…but Barbara seems more appropriate, as you never really have been a mother to me in the ways that I think are appropriate. A mother should nurture and protect her young, not eat them. A mother should touch and love her children physically and emotionally. We always had a thing in our house where we did not spank the kids…. I used to think that this was a great thing, that hitting a kid was a breach of trust… however, in our house it was just an extension of our not touching at all…not in anger or in love. Instead we were disciplined by a quiet sullen anger that would erupt in tirades that were isolating and destructive, and indicted the whole person. To this day if someone gets angry with me, I equate it with their feeling me totally worthless and with their wanting to cut things off with me. I experience a panic on the edge of which I have lived all my life.

I used to think that you were the victim and such a weak, ineffectual woman whom life had dealt some cruel blows. You were really a goddamn slut who was manipulating everyone with your supposed helplessness. When I look back you sure were the victor who ended up with the spoils. Your possessions always meant more to you than anyone else…that’s funny, I said “anyone” but to you they were animate…at least as animate as you were. You always lavished such care on the house, the car, your boat…and of course your poodle…but he offers no threat…time time time…time and money and things…that’s your life. I could never understand why you were always running around saving time…it never seemed to me that you did anything with it…you don’t read, you don’t think…what is important to you…not your new husband, Bill…he is just another non-threating object in your life that gives you the impression that you are not alone…but you are ALONE AND IT’S YOUR OWN GODDAMN FAULT…. It could have been different…when I was little I really needed you and if you could have been there for me instead of sacrificing me at the altar of my father…we could have a beautiful relationship now. A mature mother and daughter relationship instead of this.

When I think of you I get all squirmy and ughc…it’s like you were completely decayed inside and if I really gave you a warm supportive loving hug…your walls that are a façade would crumble…you are a variation of Dorian Gray only yours is happening inside…. You are like a bacteria that cannot live in the presence of warmth and love…and real concern. I have paid too high a price to pretend that I have a mother…I don’t…and I do not want to sacrifice my own daughter at your altar.

Notice in this first letter that the daughter doesn’t pull any punches. Her letter hits hard and gets to the heart of the matter. The author allows herself to write EXACTLY what she feels. She gives herself complete permission to express her anger, her hurt, and her sadness without any filtering. There’s no attempt to make the letter more palatable for mom, and this is exactly the point: this letter is not for mom; it’s for the daughter.

Try to keep this point in mind when you sit to write your letter. That is, the purpose of your letter is not to change your parent or to somehow convince them that they were in the wrong. Such a letter would require you to write with careful discretion, in a way that your parent might be able to hear your pain and your concerns. Emphasis on “might.”

This isn’t that letter. This letter is for you and you alone. Its purpose is to help you to feel what you feel, especially the feelings you’ve kept hidden from yourself and others—the heavy feelings that have weighed you down and held you back for far too long.

Letter #2: The realistic response letter from your toxic parent

Those of us who stand to benefit from writing the first letter described above have likely experienced our previous expressions of anguish falling on deaf ears. One or even both of your parents may have lacked the ability to hear you, to recognize the pain you experienced “back then”—and the pain you still carry with you now.

The hopelessness of ever being truly heard by your parent can hold you back from expressing what you really feel. Perhaps you’ve made previous attempts to reach out to your parent, hoping he or she would respond with warmth, love and acceptance, only to receive evasive denials in return.

This second therapy letter is one way to move past our expectations of our parent’s predictably cold, dismissing response. The goal in writing this realistic response letter on behalf of your parent is to capture the response that has felt so devastating to you each time you’ve attempted to get close to your parent in the past.

In a sense, the whole point of this second letter is freeing yourself to write the third and final letter—the reply you’ve always wanted from your parent but never gotten.

More on the third letter below. But first, let’s look at an example of the realistic response letter:

I was very disturbed by your recent letter. When you are a little older, Willo Ann, I think you will understand more of the kind of things that I did. It is not as easy as you younger people like to think that it is. When your children are older you will find out what it is really like.

Bill and I went down to the boat for the weekend…. I baked a chocolate cake and 60 dozen cookies. I froze some of the cookies in little bags so that I can take out a dozen at a time when I need them. We have bought a new refrigerator for the boat and it is wonderful. We can take enough food down for the whole weekend. We took a cruise at night to look at the harbor lights.

Bill is going to take off the month of August so we can take a cruise. He has worked very hard this year and really needs the rest. We have been working in the yard every night when he gets home, trying to get it in shape. It was such a mess, you know, since we haven’t gotten much rain.

I told you that we had the complete house repainted. It really needed it. It looked so awful. I have put up lovely ruffled curtains in the guest room…it was very expensive, and the painters worked so slowly. I could have done it faster myself and probably better but I just don’t have the energy anymore. Anyway, it was really nice to have it done. We haven’t heard anything from your brother. I guess he is still up in Maine.

I have discovered a new recipe for Marshmallowed Marshmallows. It is really terrific. If I can find the recipe I’ll send it to you. It’s very quick to make and you can freeze it.

It’s almost time to go back to school again. I am not looking forward to it. The kids just aren’t the same. The town isn’t like it used to be. They don’t come from the nice families that they used to here. So many Mexicans and colored now, you know. If I can just get assigned to Home Ec., it’s so easy because I have done it before, and hang on a few more years, I can retire.

Well, say hello to the kids for me.

With the second letter out of the way, it will likely feel a little easier for you to write the final letter—the response you’ve always hoped for from your parent but never truly received.

I was very sad to receive your letter because it said so many things that I have known but have tried to hide from myself. I know that I was not a very good mother…I cannot even say that I tried very hard. I was so scared most of my life and was not really ready to be a mother or even a wife. I suppose I was only doing what I had seen my mother do and experience but someone has to stop the cycle. I am sorry that I could not be the one to do it. I am glad for you that you are trying to find something real for yourself…I am afraid that it may be too late for me. I am locked into a job and a marriage that are not satisfying for me but they do give me financial security. I grab onto things because I am terrified that I will be poor, old, ugly, stupid and alone.

You were such a cute little girl that I regret that I did not enjoy you when you were small. Your own daughter reminds me so much of how you were. You should value this time with her because it will never come again. I know.

Young people seem to be fortunate today. They have so many choices that I didn’t think were possible when I was young. Maybe that is just rationalizing why I didn’t take more control of my own life in a real way. You are right that I sold out to the wrong things. In many ways I was more in control of my own life because I never let it happen; I always manipulated the situation. It only left me with a very empty, lonely life. It’s ironic but in fact all the things that I feared have really come to pass.

I hope that it is not too late.

In this third and final letter, the daughter, writing as her mother, points to some of her mom’s emotional baggage that likely prevented mom from being the mother Willo needed her to be.

In writing this letter in the soft, compassionate tone that she does, Willo is letting herself know that she deserves being treated with love and respect. Contrary to the message she internalized as a child—I’m invisible and unimportant—she is effectively saying to herself: Your experience matters. Your emotions matter. You matter.

Interested in other ways of dealing with toxic parents? Contact Modern Era Counseling today to learn more about how we can help you navigate a relationship with a toxic parent.

How to Communicate Effectively in a Relationship—6 Traps to Avoid

How to Use Online Dating Apps Without Sacrificing Your Self-Esteem